Chettinad is a region almost centrally located in the southern Indian state of Tamil nadu. Its a culturally and historically important region famous for its unique cuisine, agriculture and architecture.

The origin of Chettinad begins in the 13th century when the Nattukottai Chettiars migrated to Karaikudi. They left their previous area, the Cauvery Poompattinam, following a massive flood. The new settlement eventually became the Chettinad region (Land of the Chettiars) of 96 villages (in 1947) over a 600-1500 square mile area, out of which around 75 villages still exist today. Starting as traders, the Chettiar’s travels took them to various states in South East Asia, such as Sri Lanka, Singapore, Burma, Cambodia, Vietnam and Malaysia.

The story of the Chettiars is a fantastic one, spanning centuries, covering their growth from traders and merchants of salt, gems, textiles and jewellery to their entry into banking and finance in the 19th century. It is said that the Nattukottai Chettiars controlled a large part of the banking economy in India for decades around the turn of the 19th century.

The most endearing symbol of the Chettiar era has been the Chettinad homes. From cuisine, architecture, furniture and customs, the rich and well-travelled Chettiars evolved a unique style combining western and eastern sensibilities. These result in an experience found nowhere else in the world.

The town, arts and culture

Many aspects of Chettinad remain unchanged from decades ago, including the rice and paddy cultivation which is testament to the agricultural background of this region. On reaching here, you will be greeted by large expanses of paddy which contrasts with the bustling streets once you enter the town. The rustic landscape is majestic for its vast expansive spaces, carpets of green cultivation and lit up by the sunny climate. Within the town, the streets offer a wealth of experience – the arts and crafts patronized by the Chettiars evolved into a unique format only found in Chettinad. Try on the Chettinad jewellery , which is a unique handmade art form that stands out even amongst the rich Indian jewellery styles, or visit local artisans and watch them hand craft the world famous Athangudi tiles which are glazed to perfection for luxury homes that try to recreate the Chettinad architecture. The streets have stood unchanged for a century and are a testament to the town planning prowess of the Chettiars who were originally known as Nagarathars (Dwellers of the town).

Find grand temples or small deities at every turn, from the major temples in the center of town to the lonely shrines that dot the outcrops. The fragrance of the spicy cooking that spills onto the streets from the homes will constantly remind you of the iconic cuisine that bears the name of the region. Guides can lead you through the streets to recreate the history of town living from another era and bemuse you with the stories that they reveal. Revel in the legends of the powerful families that originated here and are still represented by the opulent homes that they built. Observe the temple rituals that continue unchanged for centuries and the meaning behind them.

After a day soaking up the sights and sounds of the town, hitch a ride onto a bullock cart to the idyllic outskirts, where you can watch the sunset over the silhouette of the opulent homes framed against the rustic background. It is here that you can appreciate the contrasts of this region – spicy and sweet, luxurious yet practical, bustling but also calming, expansive yet ornate, dusty yet lush. This is Chettinad at its vintage best. 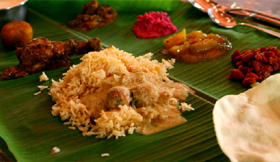