In ancient days, it was a common practice to build forts to protect ones’ territories and subjects from invasions. Such a fort exists in the town of Thirumayam, situated along the Pudukkottai-Karaikudi highway just a short distance away from the city of Pudukkottai in Tamil Nadu. Pudukkottai is famous for its historical temples, Sittannavasal paintings and ancient monuments. 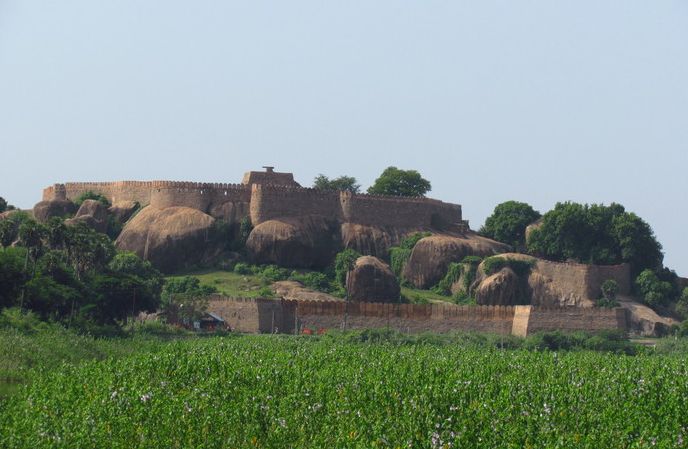 The Thirumayam Fort is believed to have been built in 1687 AD by the Raja of Ramnad, Sethupathy Vijaya Ragunatha Thevar. He later handed over the fort to his brother-in-law, Ragunatha Raya Tondaiman. The fort has an interesting ring design and is constructed with seven concentric walls surrounded by a broad moat. However, only four such walls are left standing now. The construction of the fort doesn’t show great craftsmanship as it is built of small stone blocks and bricks. The current fort stands on a 40-acres wide fortress while the original structure was at least two times larger than what is seen today.

The Thirumayam Fort is under the care of the Archaeological Survey of India and was extensively renovated in 2012 as it is an important monument and a major tourist attraction in the Pudukkottai district. The Fort has three entrances on its northern, southern and eastern sides. The main entrance of the fort is located about a kilometre away from the present structure and has two cannons mounted on each entrance gate.

Halfway to the foot of the hillock on the northern side, there is a rock-cut Shiva temple and carved out of the side of a huge boulder. There is also a Durbar Hall with some carved inscriptions as well as a pillared corridor. There is another ancient shrine towards the southern side dedicated to Hanuman, Ganapathi, Sakthi and Karuppar, all of who are guardian deities of the fort. To the north-western side, there is a natural pond and another tank towards the southeast. The Pampa River meanders along the front of the Shiva temple where Shiva is worshipped as Bhairava, a fierce manifestation of Lord Shiva, and believed to be the protector of all living beings around the fort.

This fort was of historical significance during the Polygar Wars. It was also used during World War II as an arsenal by the British army. Today this heritage site is peaceful and open to the public.

Getting here is simple as it’s easily accessible by rail and road and air. You could stay over at the magnificent Chidambara Vilas heritage hotel and experience the grand life of yesteryears.