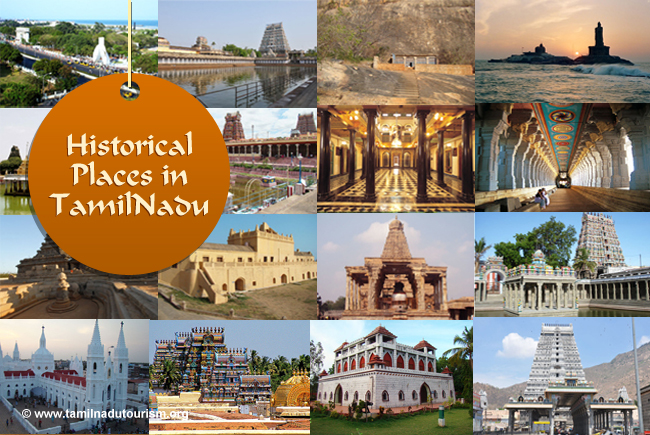 The state of Tamil Nadu is seeped in history; both ancient and modern. While some places reflect its cultural history, others reflect its religious history and yet others signify India’s freedom struggle. Here’s a list of some of the top historical places in Tamil Nadu.

Tanjore is home to the ancient cultural history of the Cholas. The Brihadeeshwara Temple built by Raja Raja Cholan over a 1000 years ago speaks volumes about the power and influence of these kings. Besides the Brihadeeshwara Temple, there’s also the Gangaikondan Choleshwarar Temple built by Rajendra Cholan, the son of Raja Raja Cholan. It is said to be a smaller version of the temple built by his father. Tanjore was ruled by several dynasties; the Marathas were one of them. They have also left a legacy of their own. Two of them include the Maratha Palace and the Saraswathi Mahal Library. The Maratha Palace was home to the Bhonsles and the Saraswathi Mahal Library was started by the Nayaks, but later developed by Serfoji II. This library holds thousands of manuscripts written in Sanskrit, Marathi, Telugu, etc. and is a true treasure to historians and connoisseurs of literature. A museum adjoining this library is also worth visiting.

Madurai is home to the famous Meenakshi Amman Temple. References of this temple have been found as far back as 7th century AD. But it is believed that the temple was raided and destroyed by Malik Kafur. It wasn’t until the 16th century that Vishwanatha Nayak took the job of restoration unto himself. His successor Thirumalai Nayak expanded the temple to its current form. Besides the temple, you can also visit the Thirumalai Nayak Palace.

Panchalankuruchi is a place 17 km from Tuticorin. This small village holds a lot of historic value in terms of India’s freedom struggle against English dominance. It is home to an 18th century chieftain Veerapandya Kattabomman who fought valiantly against the English, but was defeated and hanged. Although his palace was completely destroyed in the battle, it was rebuilt as a memorial fort in 1974 by the Government of Tamil Nadu. A visit to Pachalankuruchi exclusively to visit this fort isn’t warranted, but if you are traveling from Madurai to Tuticorin, do not miss a chance to visit this place.

Sivagangai district is home to the famous Karaikudi city, a place commonly referred as Chettinadu. One can visit the Thirumayam Fort, the Sivagangai Fort, the Chettinadu Palace and many such forts here.