The Gangaikonda Cholapuram temple, also known as the Brihadeeswarar temple is considered among the largest temples in the country and is a fine example of Dravidian architecture during the Chola era. It is located in Gangaikonda Cholapuram in the Ariyalur district of Tamil Nadu in southern India. The temple is believed to have been built in 1035 AD by King Rajendra Chola 1, son of King Raja Raja Chola who built the original, much larger Brihadeeswarar temple in Thanjavur. 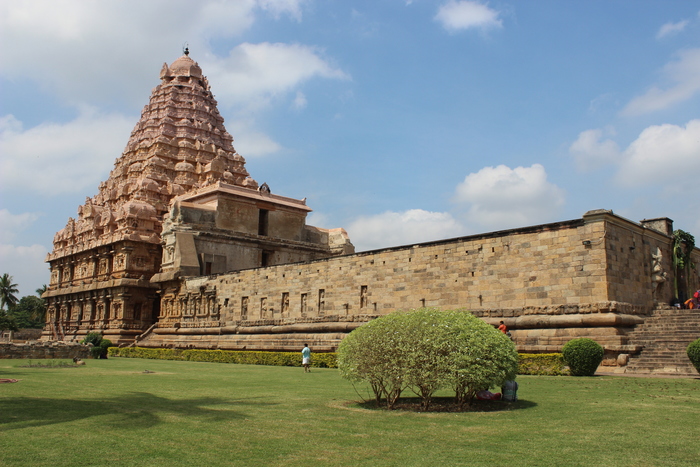 The temple is dedicated to Lord Shiva and he is worshipped here in the form of a lingam which is 18 feet wide and 13 feet tall. It is considered to be one of the largest lingams constructed in the country. The idol of the ‘Nandi’ is placed in such a way here that it reflects light into the sanctum. Interestingly, the flooring of the sanctum is made up of ‘Chandrakanta’ stone slabs which remain cool during the summer and warm during the winter months.

The temple itself is built along grand lines and rests on a raised platform. It has a courtyard that is 341 feet in height and 100 feet in width. The Gangaikonda Cholapuram temple has a concave outline divided into eight zones; this was deliberately done to make it appear smaller than the original temple in Thanjavur. The temple is also famous for its bronze sculptures, ancient inscriptions and paintings.

Along with the Airavatesvara temple at Darasuram, the above-mentioned three temples form part of the Great Living Chola Temples that are part of the World Heritage Sites under UNESCO. All three temples share the same grandeur and marvellous architectural styles practised during the Chola dynastic rule. The Gangaikonda Cholapuram temple is located near the Kollidam River and within the fertile Cauvery River delta.

A whole city was believed to have been built around the temple, but as of today, all that remains standing is the temple itself surrounded by ruins of the two-century-old city. There is evidence of there once having been ‘Gopurams’ or gateways into the temple, but all that remains now are the two images of ‘Dwarapala’ or guardians. After Pattadakal, this is believed to be the second World Heritage Site that is so abandoned amidst ruins, with not even basic food facilities in sight.

That aside, the temple is still a functional one with rituals being conducted four times a day. It also has a lion well where waters from the Ganga was poured. You can visit this mystical temple in Gangaikonda Cholapuram as its well connected by highways, railways with the nearest airport being in Trichy.