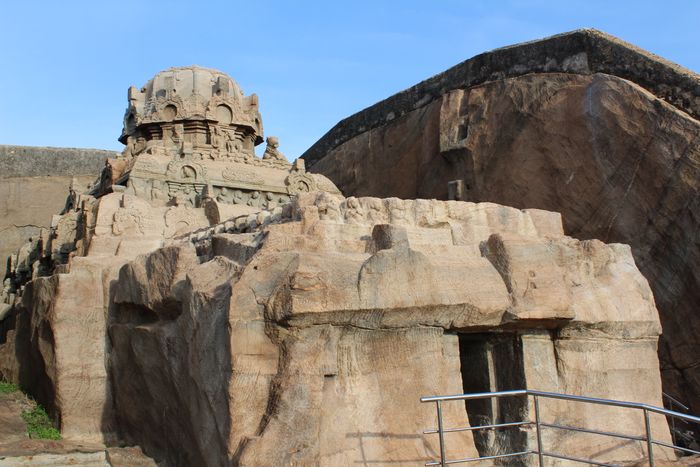 Most people are attracted to the mysterious, the allure of the unknown and the will to explore all things of a bygone era. Such is the fascination that goes with the Vettuvan Koil. The name itself means heaven of sculptors. It is an ancient unfinished Hindu temple that was carved out of rocks between the 8th and 9th century. It is also the only monolithic Pandyan temple still surviving.

This incomplete monolithic cave temple is sculpted from a single rock, with only the top portion of the temple having been completed. This portion itself houses about 122 beautifully executed sculptures of various gods, goddesses and animals including the bull (Nandi), lions and monkeys. These carvings typically reflect the reigning southern-style of architecture. The temple also has an unrefined entrance and main hall for the residing deity.

This rock-cut cave temple is located on a hilltop in Kalugumalai, a small panchayat town in Thoothukudi district of Tamil Nadu. Another interesting feature here is the 8th-century Kalugumalai Jain Beds that are carved out of the rock surface too. The temple itself is carved from a single granite rock in a rectangular area measuring about 25 feet in depth. The granite rock looks alike blooming lotus with rocky hills surrounding it from three sides.

There are some interesting local legends associated with this temple too. One legend says that a great rivalry existed between a father and son sculptors with the son claiming that he would complete carving a Murugan temple in the foothills before his father could complete the Shiva shrine uphill. Since the son finished first, the father got enraged and killed the son, thus leaving the Shiva temple incomplete. Another legend suggests that a father sculptor wanted his son to first learn the tricks of carving before starting his work. So when he heard the son chiseling away in defiance in the inner chamber, the father got so enraged that he killed his son.

Interestingly, there are two literal meanings to ‘Vettuvan Koil’ and could either mean ‘heaven of sculptors’ or ‘the temple of slayer’! You can decide which meaning you want to go with, once you have visited this spectacular site.

This incomplete temple is maintained and administered by the Department of Archeology of the Tamil Nadu government and is a protected monument. The hilly town of Kalugumalai was included in the ‘Rural tourism sites’ during the Incredible India campaign, resulting in a 700% increase in tourist footfalls.

Isn’t it time you came and discovered this beautiful side of the county too?