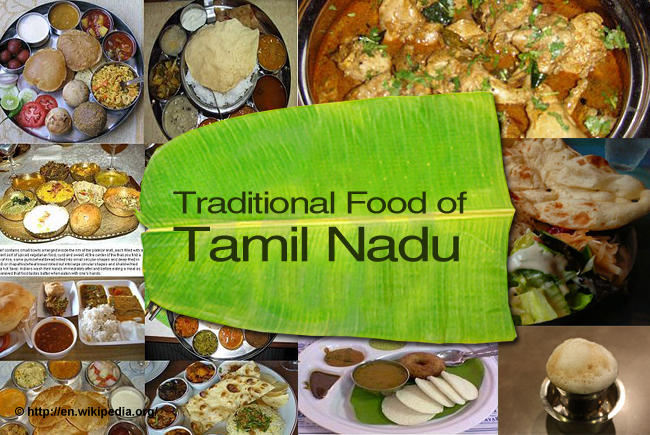 If there is something that Tamilians like to discuss besides cinema and politics (yea, in that order of priority), it is the food of their state. In fact, there are instances where food and politics are mixed for a heady combination of subsidized meals that have now been introduced in the state! To those ignorant about Tamil Nadu politics; the state has now announced a scheme where meals will be provided for as less as Re. 1. Although dishes like idli, dosa, sambhar and rasam are common throughout the state, it also has its share of regional influences. Some of the common traditional delicacies in Tamil Nadu are mentioned below along with their region of origin:

Chettinadu cuisine is undoubtedly the most important culinary export of the state. It includes dishes made in Karaikudi and its surrounding villages. Chettinadu cuisine is popular because of its subtle use of spices that are ground fresh every time. Rice is a common base for most dishes; some of them include paal paniyaaram, idiyaapam etc. Contrary to popular opinion, meat and poultry based dishes are not a common occurrence in Chettinadu cuisine, but are still popular. Some of them include kozhi varuval (chicken fry), melagu perattal (pepper chicken) and the like. Some spices unique to this cuisine include kal paasi and maratti mooku.

Nanjil Nadu cuisine is famous for its abundant use of coconut oil and coconut. The food and the cooking style here is similar to that of Kerala, especially Southern Travancore. Nanjil Nadu refers to the district of Kanya Kumari (although puritans would like to restrict the term being used to refer to the entire district). This being a coastal area, fish is found in abundance and eaten almost on a daily basis. Some of the specialties of this area include avial, erriserry, ulundhanchoru (a dish made of black gram lentils, rice and coconut), kappa (also called kelungu) and meen curry (fish curry) etc. Also, this is probably the only place in Tamil Nadu where beef is consumed. Even Hindus here eat it.

Dishes made in and around Coimbatore, Erode, Bhavani, etc. form the basis for Kongunadu cuisine. Coconut is widely used, but it is the use of turmeric that makes this cuisine special. Traditional delicacies here are largely vegetarian. Some of the popular dishes here include oppittu, kambu koozhu, vazhai poo vadai, etc.Areas of Madurai, Tirunelveli, Tuticorin etc.
These places use meat in abundance. Some of the popular dishes include parotta, kari dosai (meat dosai) and jigar thanda.