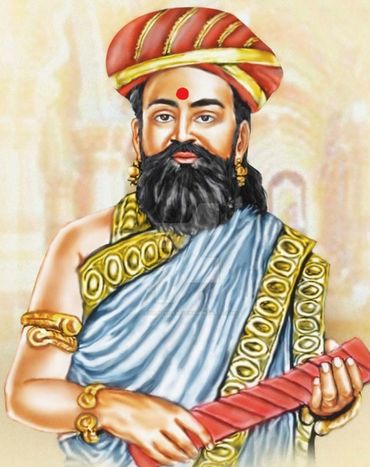 The southern state of Tamil Nadu is steeped in culture and religion with Hinduism being the predominant religion here. The state is covered with an unending array of temples dedicated to numerous deities, with many of the temples holding historical and mythological significance.

It is also where the medieval Tamil poet Kambar lived around CE 1180-1250. Popularly known by other names including Kamban, he is said to have authored the Ramavataram, the Tamil version of the Ramayana. It was first recited by Kambar in the famous Sri Ranganathaswamy temple on Srirangam Island in Trichy. During his time, he also authored various other outstanding literary works such as Kangai Puranam, Thirukkai Vazakkam, Silaiezhupathu, Erezhupathu, Sadagopar Anthathi and Saraswathi Anthathi.

Though Kambar belonged to the Occhan caste, who are traditionally ‘nadaswaram’ players, he was brought up in the home of a wealthy farmer in Vennai Nellur. As the fame of this talented bard grew, the reigning Chola king invited him to his royal court and honored him with the title of ‘Kavi Chakravarthi’ which translates to ‘Emperor of Poets’. Kambar flourished in his profession living in Therazhundur village of the culturally-rich Thanjavur district. His great knowledge of the two richest ancient languages of India – Sanskrit and Tamil, helped in furthering his literary career; so much so that the king commissioned him to compose the Ramayana in Tamil. As Kambar was running out of the deadline date set by the king, Lord Ganesha is believed to have written the entire legend of Ramayana in one night as Kambar dictated out the poems to him.

The Kamba Ramayana is not a translation of the original epic written in Sanskrit by Valmiki, rather it’s a retelling of the legend of Lord Rama with little twists here and there to suit the Tamil sensitivities. While the original Ramayana has 24,000 verses, the Kamba Ramayana is said to have over 10,000 songs, many similes and more than 45,000 lines or 11,000 stanzas.

He spent many of his later years with the Nagarathar community and died in Nattarasankottai. The Kamban Mani Mandapam was built here to honor him and every year, a Tamil Literary Festival is held here to commemorate his memory. Known as the Kamban Vizha, the event starts off in Karaikudi and ends in Nattarsankottai.

Getting to Karaikudi is easy as it’s well-connected by highways and rail from Trichy and Madurai with both cities providing air connectivity too. You could stay over at the magnificent Chidambara Vilas Hotel nearby, which is a renovated century-old palace and experience authentic Chettinad heritage!