The Sittannavasal cave is a rock-cut temple or monastery that’s also known as Arivar Koil. It is part of a 2nd century complex of Jain temples located in the Sittannavasal village of Pudukkottai district of Tamil Nadu. In Tamil, the word Sittannavasal literally translates to ‘abode of the great saints’. The temple is famous in India for its magnificent mural paintings dating back to the 7th century. These paintings are considered to be among the best paintings of medieval era India and are second only to the paintings in the Ajanta Caves and Bagh Caves. 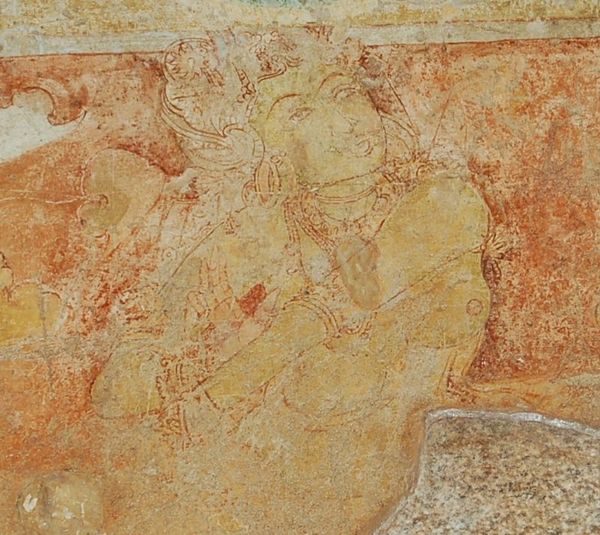 The Sittanavasal village can be dated back to 1st century BC – 10th century AD, when Jainism was predominant in this region. There are Jain stone beds on top of the hill too, pointing to this area being a pilgrimage centre for the Jain era which lasted till 9th century AD. This cave temple dates back to the Pallava King Mahendravarma before he converted from Jainism to Hinduism.

The ceiling of the cave temple’s sanctum and Ardha mandapam still flaunt beautiful paintings after so many centuries. However, many of these paintings are in a state of decay due to vandalism in the past 50-60 years. The Maharaja of Pudukkottai had attempted to have these paintings cleaned and given a preservative coating and the plaster structure restored in 1937-1939. The original structure was originally plastered and then painted, including the sculptures too. What remains now, however, are just mural paintings on the ceilings, top parts of the pillars, the cornice as well as the beams above the pillars. The paintings on the walls have sadly, perished completely. Though only parts of these painstakingly-made paintings remain now, they are nevertheless things of matchless beauty and ranked among the best frescoes in India.

The painting technique used is Fresco-secco and similar to that used in the Ajanta Caves. The murals are painted on surfaces that have first been covered with lime plaster (2.5mm thickness) before adding a thin layer (0.5mm) of thick lime wash. The pigments used for painting were permanent mineral colours with white colour being made from lime, black colour from lamp soot or charcoal, red from red ochre, yellow from yellow ochre, green from Terre verre and blue from ultramarine or lapis lazuli.

These paintings are really worth a visit to Pudukkottai. The city is well-connected by rail and roads, and the nearby Trichy airport provides air connection too. You could stay over at the magnificent Chidambara Vilas hotel here and experience heritage at its best!