The Karpaka Vinayakar temple is a work of great beauty. It’s an ancient rock-cut temple offering a bas relief of Lord Ganesha in an excavated cave located in the town of Pillayarpatti in Tamil Nadu. This is one of the oldest cave temples in Tamil Nadu and the word ‘pillayar’ in Tamil refers to Lord Ganesha.
Pillayarpatti is located between the towns of Pudukkottai and Karaikkudi of the Chettinad region. The nearest airport to this temple is in nearby Trichy while there is direct access to these towns through rail and roads.

Lord Vinayaga (Ganesha) is the lord of wisdom and fulfills the wishes of his devotees like the Karpagam tree, hence he is worshipped in this rock-cut temple as the main deity, Karpaga Vinayaga. He is seen here with only two hands, unlike in other images where he has four hands. This giant 6 feet tall image of Ganesha shows him with his trunk curled towards the right side and sitting in the ‘Valampuri’ pose. There are other interesting rock-cut images of Lord Shiva and goddesses Laxmi, Saraswathi and Durga to be found here too. Kubheran, the Lord of wealth is also worshipped here. 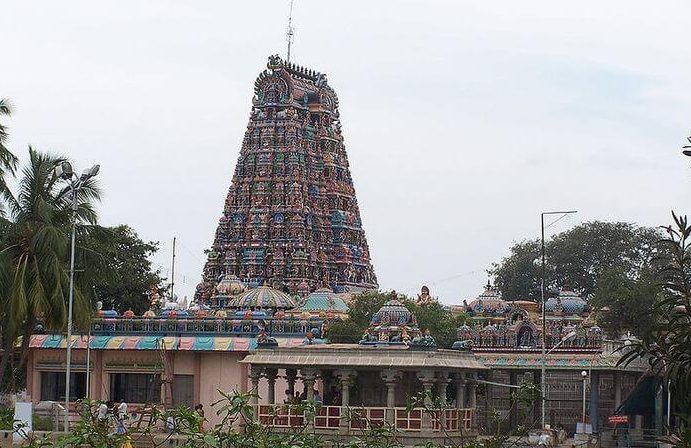 There are 15 inscriptions to be found within this temple which help in establishing its age. According to the Stalapuranam of this temple, its growth can be classified into three separate phases. The first phase dates back to around 1600 years back. This is when the innermost shrines of Karpaka Vinayagar were carved out. The pillar designs within this shrine are typical of the pre-Pallava reign. The Pallavas were very active in building rock-cut temples from around 600 AD onwards in many parts of Tamil Nadu.

The inscriptions in the Pillayarpatti temple, however, date back to the 4th century AD. Its location also suggests that it was part of the Pandya kingdom. There are inscriptions in this temple dating back to 1091 to 1238 AD denoting that the Pillayarpatti Nagarathar community became the custodians of this temple during the 13nth century. This was also the temple’s second phase of growth when the Vimanams and Rajagopurams were built.

The third phase of growth occurred more recently and included repairing, rebuilding and refurbishing of the temple complex, aside from renovating the temple tank. The Nagarathar takes great pride in this temple and it’s really worth a closer look! Getting here is easy, as you can get to Trichy by rail, road or air, book into an awesome heritage hotel like the Chidambara Vilas, and drive down to the quaint Pillayarpatti town.