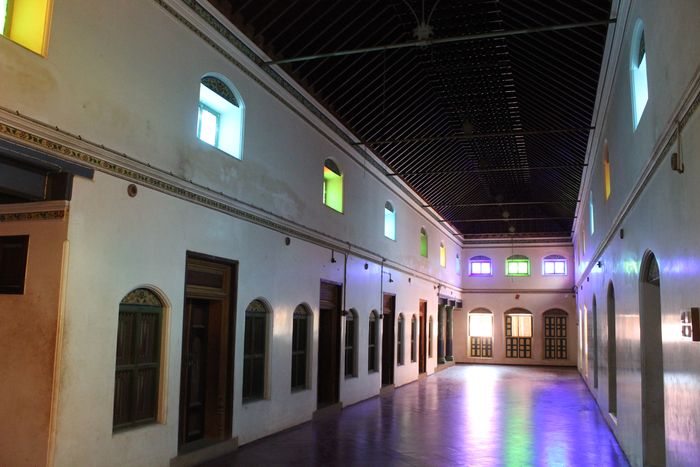 Towards the central region of the southern state of Tamil Nadu lies the culturally-rich Chettinad region. Though Chettinad is well-known for its wonderful cuisine that leaves an awesome bouquet of flavors behind in your memory, there is still a lot more to Chettinad than this.The Nattukottai Chettiars that lived in this region were wealthy traders who travelled throughout south-east Asia during the 18th century in search of commerce. They were connoisseurs of art and brought back articles of great beauty from their journeys. With the wealth they earned, they built massive homes that were literally fit to be called palaces. You wouldn’t be surprised to find massive Burmese teak pillars, chandeliers and stained glass from Belgium, marble from Italy or furniture from England! These grand homes are a part of India’s architectural heritage now.

The mansions are traditionally double-storied and have a unique design that allows them to stay cool even during the hot summers. The walls are covered with numerous layers of egg white and lime, giving the walls a gleaming finish that also helps in keeping the house cool. A typical home would start with an ornately carved teak wooden door that would open into a series of inner courtyards, such that the backdoor could be seen from the front door. These houses expanded horizontally to include the needs of a growing family. Some of these mansions even have up to a 100 rooms!

Towards the side of the front door is usually a small room which is used for conducting business. The first inner courtyard is used for socializing and conducting ceremonies. The courtyard is generally supported by beautifully carved Burmese teak wood pillars that spell opulence to the onlooker. The courtyard is also surrounded by rooms where the family members stay. It is not uncommon to find at least three generations of an extended family living under one roof. The second inner courtyard is where the family eats sitting on the ground level. The rooms opening off this courtyard could include prayer rooms, storage rooms, granaries, etc. The last courtyard is usually meant for the women and this is also where extensive meals are cooked for the large family.

Why not visit this region and experience these opulent homes first-hand. You could stay-over at Puddukottai at the grand Chidambara Vilas hotel which is a renovated century-old Chettinad palace, and get royally pampered. Getting here is easy as it’s well-connected with great highways and a railway station in nearby Karaikudi. Neighboring Trichy offers the nearest airport.