Pudukkottai district is home to many ancient monuments, many of which are temples of unbelievable beauty. The Brahadambal temple is one such gem and is located in Thirukokarnam, a small town that is about 5km away from Pudukkottai city in Tamil Nadu. This temple is known by various other names including Kokarneswarar, Gokarneswarar and Thirugokarnam temple.The uniqueness of this rock-cut temple lies in its being one of the oldest temples in south India dating back to the 7th century AD. It is believed to have been built by the Pallava dynasty King Mahendravarma 1 and is still functional today. This temple was later further added-to over the centuries by other ruling dynasties including the Cholas, Pandyas, Nayakers and the Thondaiman kings. 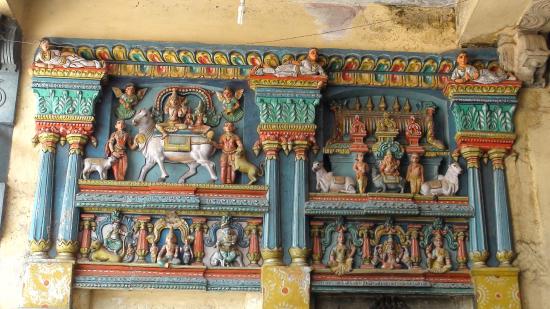 There is an interesting myth associated with this temple. It is believed that in the celestial world, Kamadhenu was late at Lord Indra’s court. In his ire, he banished her from heaven and sent her to live the lowly life of a cow on earth. She was to worship Lord Shiva and gain penance through him. Upon reaching earth, she sought the guidance of sage Kapila and daily worshipped Lord Shiva. She would tramp off daily to river Ganges and bring the holy water in her ears for performing ‘abhishekam’ for Lord Siva. This is how the deity here got its name, with Gokarneswarar literally translating to ‘Lord of the cow’s ear’.

One night, when she was returning back from the Ganges, a tiger stood in her path, ready to attack her. She asked the tiger to let her go as it was time for performing abhishekam. The tiger allowed her to go provided she returned back immediately. When she returned back, however, what she saw was Lord Shiva and Parvathy take place of the tiger, and they took her back to heaven with them.

Comparatively, this cave temple has more architectural features, exquisite relief sculptures, carved pillars and over 30 important inscriptions dating from the 7th-17nth centuries. It was the centre for dance and music renditions and has 5 temple cars made with great craftsmanship.

A visit to nearby Trichy should include a trip to Pudukkottai and this temple as it’s easily accessible by rail, road and air.