Karaikudi is a town in Sivagangai district in the southern state of Tamil Nadu. It is the bastion of the old Chettinad culture that includes spectacular mansions and a magnificent lifestyle. The Chettiar community made their money in trading with other south-eastern countries and later went into the banking and finance sector; in fact, they are known as the founders of the modern banking system in India and were essential to the economy of South India in their own time during the 19nth and 20th centuries. 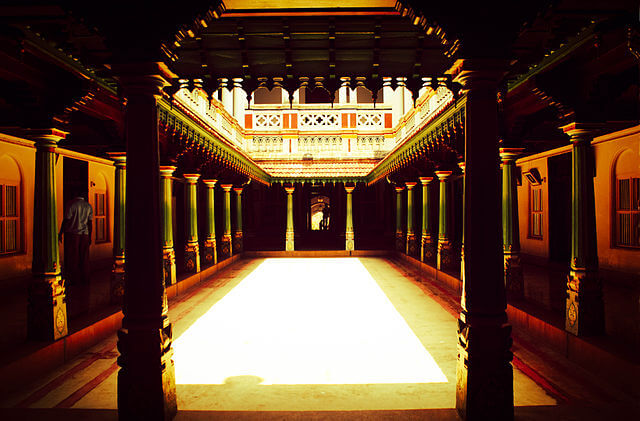 Though the community was very vast and powerful in its heydays, it’s currently only limited to 76 villages and two towns covering an area of 1,550 sq km. This area, commonly referred to as Chettinad, has been declared a heritage area by the government. The opulent lifestyle practiced by the Chettiars is easily recognizable in the luxurious mansions they built with many items brought over from different countries. Their homes included detailed wooden carvings on their main doors, wooden paneling and Burmese teak pillars. They had a unique way of plastering their walls with egg white to give it a gleam that lasts even till today.

Their love of beauty led to development of cottage industries for making silver handicrafts, hand-made Athangudi tiles, woven palm leaf baskets and hand-woven saris. With Karaikudi being the main town for Chettinad, a visit to the region is a must to understand the magnificence of the Chettiars’ culture. Some of the places to visit include the following:

– This is located in Karaikudi and was built by the Nattukottai Chettiars in the 1950’s. It’s a grand building that employs a different architectural design and is still going strong.

– This village is popular for their awesome handmade terracotta tiles. These colorful tiles are usually available in artistic flora and fauna designs and if you are lucky, you can get to watch the artisans making them!

– Also known as Chettiar mansion, it was the historic home of the Chettinad Raja, which has now been converted into a heritage hotel. The palace is a sight to behold and took ten years to construct; it is full of embellishments and furnishings from different countries from Europe and Asia, further adding to its intrigue.

– This temple was built by the Nagarathar Chettiars as a tribute to the Tamil poet Mahakavi Chakravarthy Kamban. He is known to have spent long hours here translating the Ramayana into Tamil.

– This quaint temple is located atop a small hill which is about 200 feet high. After climbing over a 100 steps, you can see Lord Murugan sitting prettily on a peacock with six faces and 12 hands. Prayers offered here are believed to be always fulfilled.

– A short distance from Karaikudi, this temple is dedicated to Lord Ganesha. With its magnificent architecture this temple dates back to 1091 AD and should be on your must-visit list!

– A short distance from Karaikudi stands this ancient fort that was built by Sethupati Vijaya Raghunatha Tevan and was further added upon by future generations of kings. It has a dreary ambience of days gone by and is great for goose bumps!

Before leaving Karaikudi, you should make a point of trying out the local Chettinad cuisine too, as its mind-blowing and unique…